Shambhu’s Skills Land Him a Job!

Shambhu (name changed) hails from Samastipur (Bihar). He is an undergraduate student and lives with his parents. His father earned a living as a dyer but lost his job due to the lockdown, depriving his family of an income of about Rs. 8000. His elder sister is married but his brothers’ study in the 10th and 12th standard, respectively. His mother is a home maker.

With no income, the family were hard pressed to pay the house rent of Rs. 6000 a month. They didn’t even have the money to pay for food, and BUDS provided the family with dry rations in January 2021. But that was just one aspect of assistance that BUDS provides.

Daya Shankar (name changed), Shambhu’s younger brother, was enrolled in BUDS computer classes and Shobha was his instructor. She was also a trained counselor, because BUDS views training and counselling as synchronous activities that ultimately benefit the young person. Daya used to tell Shobha about their desperate situation. So, she asked him to bring his brother along for a counselling session, one day. On Shobha’s advice, both the brothers started computer training at the Sarai Kale Khan Centre. Shambhu showed aptitude and with encouragement from Shobha, went on to do a medical skills training. The pharmacy course was of particular interest and BUDS sponsored his training. Now Shambhu has a job as an Assistant Pharmacist in a South Delhi hospital, while he continues his studies. 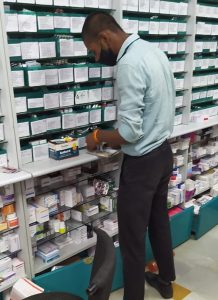 Recently, Daya Shankar started working in a medical store, earning Rs. 6000 a month. He too wants to follow his brother’s example and aspires to a medical skills training. The family fortunes have improved – thanks to the efforts of both the brothers and guidance from the BUDS counselor, Shobha

“Shambu was initially a loner. He used to sit all by himself …his body language indicated that he was worried. But after getting a job he has developed confidence in himself. He can now speak to anyone with ease. I also notice significant changes in his behaviour.  He used to be an angry young man, lackadaisical about attending classes. But now he comes on time and does his work”, Shobha says with satisfaction.

Getting skills training and a job has meant that both the brothers can support their family. Successful young men like Shambhu and Daya are glowing examples of the importance of education and training in improving their own lives and benefiting their families. The BUDS team are justifiably proud of such champions!