Struggles and challenges on the field

Mehnaz (Changed name) belongs to Rajasthan. She is 23 years old. Her father’s name is late Md. Faiyaz and her mother’s name is Anwari begam. She is a homemaker. Mehnaz has two brothers, Md. Ibrahim and Dinu, who both are married and live separately. One brother is a driver and other works as a housekeeper and earns up to 7500₹ in a month. Out of 7500 ₹ he spends 3000₹ on rent and the rest on his family’s needs. This money is insufficient for him. Both the brothers have two children. Mehnaz lives in a slum. She got to know that BUDS provides rations to poor and needy people and gives them job opportunities after imparting training from her neighbors.
One day, she came to meet the counsellor (Shobha) and discussed her problems. She shared that she lives alone with her mother. Earlier, she used to go for housekeeping in Ashram and earned upto 7500₹. But due to COVID lockdowns, she had to leave her job and was now in urgent need of employment. Then, the counselor told Mehnaz about the skill training program provided by BUDS. She told her that after getting some vocational training such as; GDA, EMT, HOE, GA etc. Mehnaz, like other students, might sit for a job interview.
After that, Mehnaz asked, “If I do the course for 3 months, how will my household expenditures run?” Then the counselor said to her, “your mother should do some work while you get trained under the vocational skills program.” Mehnaz said, “Madam, I don’t want my mother to do work at the age of 50. She said, ” Already my mother has faced so many difficulties and still she did many things for my physical and mental growth. When I was 5 years old, my mother used to do rag picking and my brothers used to do menial jobs at the railway station. My father used to drink daily and was often found by the roadside. His absence didn’t matter to us. My mother and I were forced to sleep on the road side. In winter, during night time she was very afraid because people used to drink and molest women. She has grown up in a very hard circumstance. During my teenage years, my mother sent me to her friend’s house. I(Mehnaz) had to help at their house in their household chores. Still Aunty didn’t respect or look after me.. I lived in her house for around two years. My mother sent 50₹ monthly for my expenditure. After 2 years my mother took me away from there.” Daily in the morning, her mother used to do rag picking and earned some money. Only that money helped in our survival. Despite all the hardships, her mother sent Mehnaz to school. 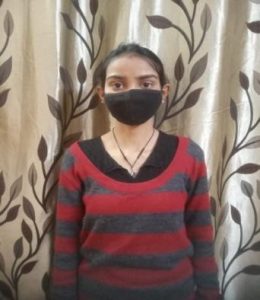 Mehnaz told the counselor, “When I completed my intermediate, I started to do housekeeping work and asked my mother to stop going for rag picking. I also rented a room for ourselves. Now, we live in a slum and my house runs on my income. But right now, I don’t have money to run my household expenditure and even we don’t have food in my house. After seeing her problems and current situation, the BUDS counselor provided a ration kit to her. Mehnaz was reassured and happier than before..
Then the counselor suggested to her that she should do a 3 months course and find a part time job somewhere. So, she can do the course as well as run her house. Right now, she is looking for a job. 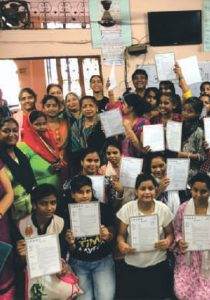