Kavya’s family has been living in a small rented room near Sadar Bazar in Basketwalan of Azad Market for the last 20 years, apart from her parents, there is a brother and two sisters in her family. The area of Azad Market is also very crowded and along with this, all the areas around it are congested as there are markets. Some of the areas around it are Morigate, Chandni Chowk, Sadar Bazar, Malka Ganj Ram Bazar, Civil Line etc. Here most of the families have migrated from Bihar, Madras and Bengal
Family Status – Kavya’s family has one brother and two sisters apart from her parents. Kavya is the eldest in the house. She had left school in class IX, due to the lack of smart phone at home, which hampered her online classes. Her mother used to work in people’s homes as a domestic worker. Unfortunately, her mother met with an accident and broke her leg. As a result, all family responsibilities fell on Kavya. Her father works but spends all his earnings on alcohol. Considering all this situation, Kavya had to leave school and start working in a bag factory. 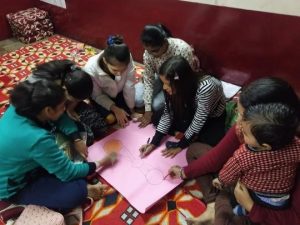 Changes after the introduction of Buds’ PACE program
We met Kavya during a field visit, when she was taking her mother to the hospital. Her mother stopped us and asked what the survey was about. Then we told her about BUDS PACE CENTER. She showed interest in sending Kavya to the centre but told us about the family’s constraints. We told her that Kavya can come to the PACE centre as it is a flexible program made for the community girls, many of whom are in similar situations.
But perhaps her mother did not know that her father had got used to sending her daughter to work, so as soon as Kavya’s mother took over her household chores, her father put her to work in the bag factory. Kavya’s earnings were not paid to her but went to her father. He spent her earnings in paying household expenses.
Ever since Kavya has joined the centre, she has gained a lot of self-confidence. Earlier she could not get along with anyone, could not stand up for herself. But slowly she is gaining confidence. Initially, she used to come for one hour to study in the centre but now she has started coming for two hours. Seeing the dedication of her studies, we have talked to the owner of the factory who has agreed that if Kavya wants to study, then she can take out two hours off from work and attend the center.
BUDS field staff have filled her tenth class from NIOS Board so that paperwork to facilitate her studying further. Kavya herself also wants to complete her studies and have a career, so that she can take care of her mother who is often ill. She wants to get her mother treated properly and wishes to educate her brother and sister further. She has just got 1500 INR online from Nirantar trust. Just as BUDS has helped Kavya, the NGO wishes to continue serving the community girls and provide them education and better opportunities in life.
(* Name changed for maintaining the privacy of the person)