Geeti (name changed) is a 30-year-old woman who lives with her husband, mother and three children in a small house in Madrasi Colony of Mori Gate area. In this and surrounding areas, most of the people are casual or daily wage labourers who do various jobs like rickshaw pullers, vegetable sellers, etc. Others are domestic or factory workers. There is also a brisk trade in selling opium and illicit liquor. As the wages earned by their husbands are not enough, most of the informal work (of selling liquor) is done by women, along with taking care of their homes.

Geeti’s husband has been unemployed for the last two years. Earlier he used to teach small children at home. But for two years, after the COVID-19 related lockdown, schools were closed so he has lost his livelihood. They managed somehow by borrowing money but as the burden of debt increased, Geeti had to find other sources of income to sustain the family. She started working as domestic help but with the number of COVID cases rising, she lost that job as well.

BUDS field staff used to meet Geeti quite often during our field visits and we would see her selling liquor and her two young children playing amidst dirty liquor bottles.  It was a distressing sight. BUDS field staff got to know her better when Geeti enrolled both her children during the BUDS drive to find school dropouts for remedial education classes. 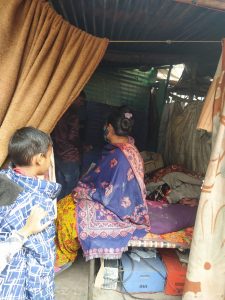 When we spoke to her, she told us about her poor financial condition “I am forced to sell liquor. I do this to run home. I earn 300 rupees a day. Well didi (elder sister), who likes to stand in the midst of alcoholics and sell liquor? Other women criticize me but it doesn’t matter to me, at least it feeds my three children, and that’s what matters the most right now.”