“We found our inspiration at the learning center where Bindu madam taught us that girls can do anything they want. This is what has given us the courage to go on, even during the lockdown,” share Pinki and Geeta, two young 10th grade students and Bal Umang Drishya  volunteers from Shastri Park Slums and Mori Gate terminal respectively.

“Girls like Pinki and Geeta have worked a lot during the lockdown. I felt extremely proud and happy when my students would come and tell me that someone from their community received the money or the ration because of their efforts,” shares Bindu, a teacher working with the PACE (a resource centre for gender and education) programme at BUDS with marginalised girls in Delhi.

In the face of uncertainty, hunger and unemployment accentuated by the pandemic, Bindu and her students started working as a team to provide relief.

Pinki shares, “My colony is filled with labourers. My father is a rickshaw driver. During the lockdown, no one was allowed to step outside their homes to go for work and I realised that lack of money and food was causing a lot of stress to everyone. I spoke to Bindu Madam and asked her if something could be done to relieve the stress of the people in my community.”

Talking about the relief process in detail, Bindu shares, “Only after talking to Geeta and Pinki, I understood the extent of distress caused by the lockdown. Rickshaw drivers, street vendors and other daily wagers were suddenly out of jobs and were desperately trying to return to their villages. When I spoke to my colleagues at BUDS, we knew we had to do something. I told the girls that we would provide the rations but they had to help us with distribution and they happily agreed. I taught them how to make the beneficiaries list and they went door to door collecting information about families who needed rations and support. On the basis of this list, my colleagues and I would then arrange for the rations. Once the ration was delivered to the girls, they would distribute it in their communities with the support of their parents, brothers and neighbours. Cooked food was also distributed. We also started filling e- ration coupons for the community. This was particularly challenging because the communities were not ready to share their bank and aadhar card details with the girls.

While Bindu and her students worked tirelessly to provide relief, they were also entangled in their own personal challenges.

“My husband’s business had shut down and I was the only earning member of the family. I was looking after the house and my work. My family thought I was always on the phone, and did not understand the value of my work. My husband and I got into a lot of fights and this was making me depressed. I also felt that while the poor were receiving government benefits, a middle class family like mine was no better off. There were no entitlements for us. I was filling the e-ration forms for others but I was not eligible for them myself  even though my family was also badly hit by the lockdown.”, shares Bindu

Talking about her on-ground challenges, Geeta says, “There were times when community members would barge into my house and complain about not receiving the money. I was also blamed for consuming their share of rations. Some people in my colony refused to take food from me because I was from a different religion.

During the lockdown, when the liquor shops were allowed to open, many unemployed men started spending their money on alcohol. This added to the stress of women. Not only the burden of feeding the kids fell mostly on them but they now also had to deal with their violent husbands. Many women in my community came together and got the liquor shops shut.”

“When I would go door to door, asking for the name of the beneficiaries, women would readily agree to give their details while their husbands would refuse and often get aggressive. They were either too proud to ask for help or were scared about their information being misused. It took a lot of effort to convince them and calm them down. But once, people started getting the entitlements, they were happy and many apologised to me later for their mistrust ,” adds Pinki.

In spite of the challenges faced during the pandemic, Geeta is hopeful about the future. “The entire experience during the lockdown has made me confident. I now feel that I can pursue my studies and stand on my own feet. I was a very shy person earlier and I would hardly talk to anyone, but all that has changed now. My community has started appreciating and respecting me. It feels good. All of us have a right to be respected. My mother works in a factory and while she works more hours than the men she receives half of what they get. I want my mother to be respected and paid equally.”

Pinki feels that the pandemic has made people more compassionate towards each other. “When I was making the list of beneficiaries for financial assistance, many families would write other people’s names instead of their own as they felt that they were more deserving than them.”

Bindu shares how the pandemic has changed her as a person, “Ever since I have experienced the satisfaction of helping others, I have been wanting to do more. Now I am aware that what I have is enough and I don’t think twice before sharing it with others. I wasn’t particularly this helpful before the pandemic. I also want more girls to become confident like Pinki and Geeta. A lot of girls are dropping out of schools in my community and I have started talking to parents to stop this from happening. Girls don’t have access to smartphones because of which they are being deprived of education. I want parents to encourage their daughters to finish their education.” 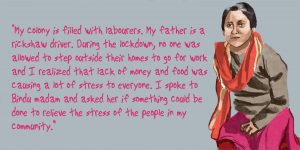 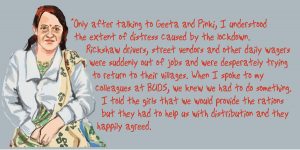